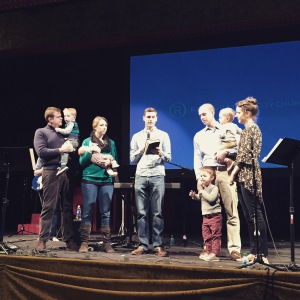 I don’t know how you felt as yesterday came to an end but I can tell you I went to sleep last night incredibly grateful for everything God did in our church throughout the day.  Odds are good you don’t even know half of what He did, so let me fill you in on a couple of things:

1.  We had a full band lead us in worship for the first time as a church.  Blake, Tim, Ben, Jon and Jeremiah killed it and I loved having them lead us.  That crew will be back together on Easter Sunday and I already can’t wait.  By the way, the Production Team did a ton of work to make a full band experience possible.  We need to be so grateful to the people who show up every week at 7.45 to serve all of us.

2.  We had our first ever child dedications yesterday.  It was a huge moment for our church as we celebrated that fact that we aren’t just a church of single, young professionals.  We want to be a church where families raise their kids to love Jesus and I feel like we took one more step towards that yesterday.

3.  Speaking of kids, we had 10 in RCC Kids yesterday, which is a new high for us!  That 10 doesn’t count a handful of infants who will hit RCCKids in the next few weeks.  I’m so grateful for what God is doing through Alex Dibble and her team – 10 kids is huge for us!

As if that’s not enough, let me share two more stories with you.

The first one you already experienced if you were with us at yesterday’s gathering.  There was a gentleman who joined us who ultimately became disruptive and needed to be escorted to the lobby.  I know it might have made you a little uncomfortable but I want you to know that was a good moment for us as a church.  Here’s why: we exist for the broken in this city and we want the lost, the hurting and desperate in our gathering every week.  We aren’t an escape from the world, we’re trying to carry hope to the world.  I love that he was with us and I love that the gentleman who escorted him to the lobby stayed with him throughout the entire sermon.  A young lady from the church came out to join them and three members of our church loved that guy, prayed with him and told him that Jesus is for him.  And, if you noticed, he came back in for the last song and knelt in the front of the theater.  Come on!  You want to know what we’re about as a church?  That’s it – we’ll welcome the broken, the hurting and those desperate for hope and we’ll pray that they come to kneel at the foot of the cross with us.

So, I was already pretty fired up when I went to spend the afternoon with Dan and 8 people who are now trained as Community Group leaders.  For the record, there were 6 men and 2 women at that meeting – a huge answer to prayer!!  But during our training meeting, something amazing happened.  I got a call from one of our current Community Group Leaders letting me know that one of the people in his Community Group was stranded about 100 miles outside of DC after her car broke down.  So, I laid that situation in front of the people being trained to lead a Community Group and asked them what they would do.  I want you to know that every single one of them said we need to figure out a way to go get her.  By the way, don’t forget how bad the weather was yesterday!  I hope you know what a blessing it is to have people like that shepherding our Community Groups.  For the record, someone did go get her.  Less than five minutes after hearing about the need, two of the people at the training had gotten up from the table and headed out to get her (yes, it’s possible they were just really bored with the meeting!).  Pretty awesome.  Here’s where it gets even better: they came back 10 minutes later because someone else from their Community Group had already gone to pick her up!!  I preached on a culture of service two weeks ago and I just sat there smiling while people were competing to figure out who could drive 100 miles to pick up this young lady faster.

Restoration City, don’t take any of that for granted.  God is doing something in our hearts – He’s calling us to serve, to love, to sacrifice and to bless this city.  I’m so grateful to be a part of it.  Let’s keep reaching for everything He’s calling us to do and be.  These really are incredible days for us.

One thought on “A Day In The Life of Restoration City”

Creating space requires so much intentionality but it’s always worth it.
Eugene Peterson described following Jesus as a “long obedience in the same direction.”
I’m a big fan of life in the city but sometimes you’ve got to break away for an evening and catch your breath! Also, corn mazes are more fun than I would have guessed.
Sabbath is a gift to be received, not a duty to be performed. Grateful for a God who invites us to rest.
Cant wait to dive into a new series this morning. Going to spend the fall working through 1 Thessalonians. Love to have you join us, in person or online (rcc.church/online)!
Hey @restorationcity.church - can’t wait to start a new series on Sunday. Take a look at 1 Thessalonians 1:1-3 and come ready, in person or online!