When Laura and I moved back to D.C. to plant Restoration City Church, we rented a little row house in the Del Ray neighborhood of Alexandria.  It was right down the road from where our church was gathering in Crystal City and we quickly fell in love with the neighborhood.  It felt like a small town right in the middle of a big city, it was walkable and had great restaurants and coffee shops.  The coffee shops were a particularly big deal for me because they doubled as my office.  My favorite is a placed called Swings.  I would walk there almost every day.  It was only a few blocks from our house and I could get there even faster by cutting through a park with a baseball field.  It’s called Simpson Park.

And this morning a Member of Congress, a Hill staffer, a lobbyist and two Capitol Police Officers were shot there.  I know exactly where the 3rd base dugout is; I’ve stopped there to make phone calls on my way home.  When I hear media reports of Members of Congress being escorted to a basketball court, I know which one they’re talking about.  There’s a little park right by the left outfield; that’s where we put Aidan in a swing for the first time. Laura still shops at the Aldi across the street and I still spend a lot of time at Swings.  So, it’s more than a little surreal to think of a shooting happening in the middle of a place we know so well and love so much.

I’ve been distracted all day by the shooting.  I keep thinking about it, wanting more information, wanting it to make sense and knowing it never will.  It makes me sad to know the whole thing will be politicized.  It makes me sad to realize that our national political discourse is so divisive that this kind of violence is tragic but not surprising.  But there are two thoughts that keep coming to mind more than any other.

One, this is why we planted a church that still meets right up the road from Del Ray.  Not this specific incident but the brokenness it flows out of.  Not political brokenness, not even moral brokenness but spiritual brokenness.  The loss of hope that comes from not knowing God, the fear that comes from not trusting His guiding hand and the pain that sin unleashes in our souls.  The church doesn’t exist to make good people better or to keep Christians entertained on a Sunday morning.  The church exists to shine the life and hope of Jesus into our world.

Two, we must do more to love and serve our city.  I’m shaken up because violence has reared its head in my neighborhood.  But for too many in our city and in our world, this is a daily reality.  I’ve always lived in neighborhoods where people say, “things like that don’t happen here.”  But there are plenty of people who live in neighborhoods where people say, “another one?”  Jesus died for the people in those communities as well.  He died to make sure that hope wouldn’t be limited to affluent zip codes.  He died that every soul would have the opportunity to find life in Him.  Every soul.

I love the city I call home.  I wouldn’t want to live anywhere else or lead a church anywhere else.  My prayer is simply that we would be the church – willing to reach out, to care, to love and to serve.  And to pray.  To pray for those shot, for their families, for our city and for our nation. 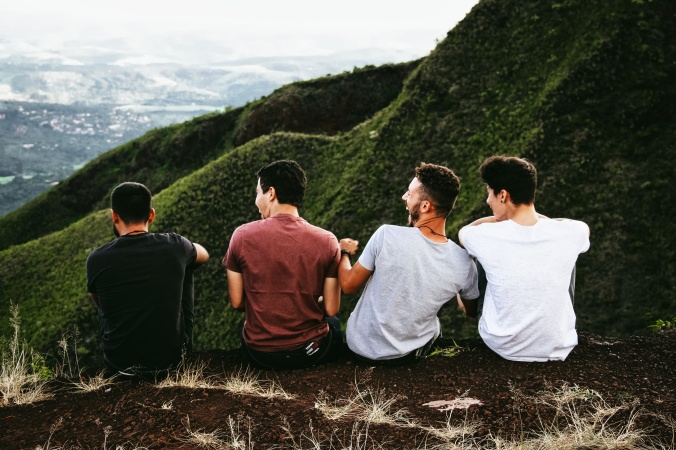 Community is both one of the most powerful and painful forces in our lives.  There are few things as exhilarating as being fully known and still fully loved.  Yet there are few things more damaging than being rejected by people we thought we trusted.

The Scriptures are clear that we’re made in the image of a relational God and are designed for community.  The local church is anchored in the belief that God uses others to make us more like Jesus.  Experience tells us that we can’t be fully human apart from relationships.

At the same time, we also know the hurt, disappointment and disillusionment that often comes with community.  Sin is the explanation for most of that.  We’re all messy, broken people.  Community simply multiplies the mess.

But sin alone doesn’t explain our struggle with community.  Unmet expectations also play a big role.  In his book Life Together, Bonhoeffer says, “Those who love their dream of a Christian community more than they love the Christian community itself become destroyers of that Christian community even though their personal intentions may be ever so honest, earnest and sacrificial.”  That’s a shocking truth – our zeal for community can turn us into unintentional destroyers of community.  But that’s what happens every time we create a utopian picture of community that simply doesn’t exist this side of heaven and then blast every opportunity for community we have because it inevitably fails to meet those expectations.

The more I think about it, the more I realize a lot of our unmet expectations come from confusion regarding the relationship between the words friendship and community.  We commonly use them as synonyms.  But they aren’t.  They mean very different things.

The whole sermon is worth listening to but here’s his argument in a nutshell: you might become friends with some of the people you are in community with but friendship is not the ultimate expectation of community.  Yes, the church is a family.  But Crump points out that not all family members are friends and reminds everyone that’s okay.  There are some cousins you like to hang out with and some you don’t.  It doesn’t mean you aren’t family or that you’re doing something wrong.  It just means you aren’t friends.

If friendship isn’t the ultimate expectation of community, what is?  Pastor Crump defines the ultimate purpose of community as “fellowship, partnership and encouragement to walk faithfully with God.”  I love that because that’s exactly what our Community Groups at Restoration City are designed to do!  We gather together every week to spur one another on, to encourage one another not to be hardened by the deceitfulness of sin and to encourage one another to run our race well.  Will friendships develop out of that?  I hope so.  But friendship isn’t the ultimate goal of our Community Groups – mission is!

Just to be clear, I’m not minimizing the importance of friendships.  They’re vital.  But no church or program can form friendships for us.  Friendships are something we form individually, one person at a time.

I want to keep thinking more about this in my life and in our church.  Would love any thoughts or feedback you have.  Feel free to leave a comment below.

My heart is steadfast, O God,
my heart is steadfast!
I will sing and make melody!
Awake, my glory!
Awake, O harp and lyre!
I will awake the dawn!
I will give thanks to you, O Lord, among the peoples;
I will sing praises to you among the nations.
For your steadfast love is great to the heavens,
your faithfulness to the clouds.
Be exalted, O God, above the heavens!
Let your glory be over all the earth!

Those words were written by David, the great King of Israel.  But he didn’t write them from his throne.  He didn’t write them after he defeated Goliath, got married, brought the Ark of the Covenant back to Jerusalem or entered into a covenant with God.  He wrote them from a cave.  He was there because Saul, the then King of Israel, wanted him dead.

I’ll be honest – caves creep me out.  I hate caves.  They’re dark, wet and you have absolutely no idea what else is in there with you.  Bats are a given and then the horror just spirals out of control from there.  Being in a cave is like being locked in a dark basement as a kid but with actual reason to be afraid.  So, when a cave is the safe option, you know you’re having a bad day.  And David was having a pretty bad day – he was being hunted like an animal with no help in sight.

Yet, David holds a worship service.

Focus On His Soul & Savior, Not Circumstances

Yes, David asks God for mercy (v.1,2) but he’s not obsessed with his circumstances.  I would have made sure God understood just how bad my situation was, how unjust it was and how much I really, really wanted Him to do something about it.

But not David. He seems most focused on the condition of his own soul.  Five times in the psalm He makes a reference to His own soul or heart.  It’s his soul that takes refuge (v.1), is in the midst of lions (v.4) and is bowed down (v.6) in addition to being steadfast.  Which leads me to ask, are we more focused on our souls or our circumstances?  I know that when it comes to my soul, I tend to take more of a “we’ll deal with all of that once you get me out of this cave, God” approach.

David’s focus on his soul is so essential because it leads him to focus on his Savior.  David’s hope is in God’s steadfast love (v.10).  He’s not praying that God will bless his plan in some way.  He’s confessing that his only plan is to take refuge in the shadow of God’s wings and trust God to rescue him.  God’s grace is plan A and there is no plan B.

Confidence In The Promises Of God

Even though life is falling apart, David is totally confident that God will be faithful to all of His promises.  He knows that God’s promises aren’t dependent on our circumstances but on His character.  So, David is sure that God will send from heaven and save him (v.3).  It’s not a question for David.

We get so concerned when God deviates from the script we’ve written for Him.  If only we could learn that God’s deviations aren’t because He doesn’t love us but because He does.  He’s going to fulfill every single one of His promises to you.  Don’t look to your circumstances to figure out if you believe that – look to the cross of Jesus and be sure of it!  You can trust a God who’s already died for you.

Caves aren’t a reason to forget the promises of God.  They’re a reason to cling to them even more fiercely.

Desire For The Glory Of God Above All Else

We become brave when we find something bigger to live for than our own lives.  That was David’s story.  Even in his cave, his desire was constant, “Be exalted, O God, above the heavens!  Let your glory be over all the earth.” (v. 5,11).  He’s so focused on God’s glory that he prays the same thing twice!

If all we care about in life is our own comfort, the inevitable caves of life will kill our joy and crush our spirits every single time.  But if we find something bigger, something that can’t be touched even in the darkest cave, something that spans all of eternity, caves loose their power.  No, we’ll never enjoy them.  But we will trust that God can use them.

Songs of hope are most powerful when they echo out of caves of despair.  When praise erupts in the middle of affliction, the world notices.  When thanksgiving comes in the same breath as a plea for mercy, people listen.

Your cave isn’t a sign that God doesn’t love you.  It’s an invitation to put all of your life in His hands and trust that He will be faithful in using you in a story that spans all of eternity.  Caves aren’t comfortable.  But they aren’t catastrophic either.

We really can learn to sing in a cave.